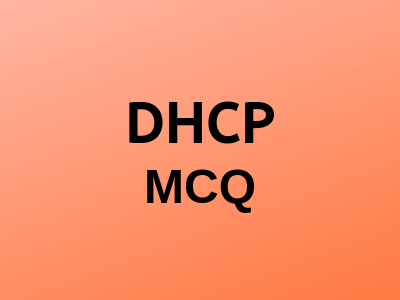 2. How is the message sent from a PC2 when it first powers on and attempts to contact the DHCP Server?
A – Layer 3 unicast
B – Layer 3 broadcast
C – Layer 3 multicast
D – Without any Layer 3 encapsulation
Answer: B

8. Which statements are true about the DHCP quarantine method? (Select two.)
A. The DNS server for a quarantine subnet is assigned by the enterprise DHCP server.
B. A quarantine subnet consists of a set of IP addresses dynamically assigned to endpoints.
C. Endpoint Integrity can be managed for endpoints with static IP addresses by defining exceptions.
D. A non-quarantine IP address is assigned by the NAC 800 after an endpoint passes integrity testing.
E. Port 2 of the NAC 800 can be connected to a switch that provides a path to multiple DHCP servers.
Answer: BE

10. Which configuration task is applicable to the ProCurve NAC 800 inline quarantine method?
A. Enable the internal firewall.
B. Specify one or more quarantine subnets.
C. Add IP address entries to the Accessible Services List.
D. Select the port to be used for connection to the external network.
E. Identify the static and DHCP IP address ranges of endpoints to monitor.
Answer: C

11. What is an important factor to consider when deploying the ProCurve NAC 800 using the DHCP quarantine method?
A. The IP address lease duration must be set to five minutes or less on the DHCP server.
B. The DHCP server requires one additional, non-overlapping scope for every existing DHCP scope.
C. A switch must support traffic mirroring for each DHCP server protected by the NAC 800.
D. Endpoint Integrity cannot be enforced for devices using static IP addresses.
E. The DNS server scope option on the DHCP server must be set to the IP address of the NAC 800.
Answer: D

18.  ______ _: Declares the host that’s the most authoritative for the zone and, as such, is the best source of DNS information for the zone.
A. DNS PTR Record
B. DNS Start of Authority
C. DNS Monitoring tab
D. DNS A Record
Ans: B

20. _____. Is the process of placing timestamps on dynamically registered records
A. Aging
B. IP
C. AIPAC
D. TCP
Ans: A

24. Connection-Oriented Protocol for end-to-end communication is called
A. Aging
B. CORRECT: TCP
C. IP
D. None of the above
Ans:  B

30. ______ interval is the period after the timestamp is set that must elapse before refresh can occur.
A. Nonsecure Method
B. Refresh Interval
C. Forwarder
D. No-refresh Interval
Ans: D

36.  _____ is used to determine the IP address of a computer from its FQDN
A. Forward Lookup Zone
B. Forwarder
C. Reverse Lookup Zone
D. Normal DHCP Scope
Ans: A

37.  Name server designated as the recipient of forwarded queries is known as _______
A. Class B
B. Class C
C. Forwarder
D. None of the above
Ans: C

40. Every DHCP server must have at least one active scope to grant leases to clients
A. True
B. False
Ans: A

47. which Identifies with parts of the IP address belong to the network ID and which parts belong to the host ID.
A. Class A
B. Subnet Mask
C. Super Scope
D. Scavenging
Ans: B