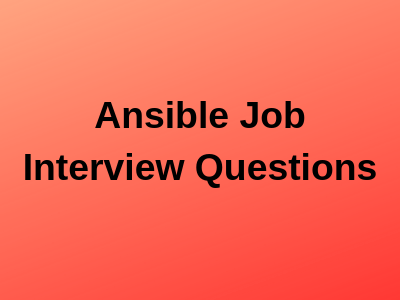 2. Define what is the Use of Ansible

Ansible can be used in IT infrastructure to manage and deploy software applications to remote nodes. For example, let’s say you need to deploy a single software or multiple software to 100’s of nodes by a single command, here ansible comes into picture, with the help of Ansible you can deploy as many as applications to many nodes with one single command, but you must have a little programming knowledge for understanding the ansible scripts.

We’ve compiled a series on Ansible, title ‘Preparation for the Deployment of your IT Infrastructure with Ansible IT Automation Tool‘, through parts 1-4 and covers the following topics.

3. Define how would you describe yourself in terms of Define what you do and Define how you’d like to be remembered?

Obviously I’d like to be remembered as a master of prose who forever changed the face of literature as we know it, but I’m going to have to settle for being remembered as a science fiction writer (and, more and more, critic) who wrote the occasional funny line and picked up a few awards.

4. Why are you attracted to science and science fiction?

Early imprinting, maybe, for science fiction. When I was quite small a family friend let me read his 1950s run of ‘Galaxy’ magazine. My favorite aunt pressed John Wyndham’s ‘The Day of the Triffids’ on me; a more terrifying great-aunt gave me G.K. Chesterton’s fantastic novels; and so on.

Incurable addiction had begun. Meanwhile, science classes just seemed to be the part of a school that made the most sense, and I fell in love with Pelican pop-maths titles – especially Kasner’s and Newman’s ‘Mathematics and the Imagination’ and all those books of Martin Gardner’s ‘Scientific American’ columns.

5. Tell us about your software company and Define what sort of software it produced(s).

This goes back to the 1980s and the Apricot home computers, the early, pretty and non-PC-compatible ones. My pal Chris Priest and I both used them for word processing, and he persuaded me to put together a disk of utilities to improve the bundled ‘SuperWriter’ w/p, mostly written in Borland Turbo Pascal 3 and later 4: two-column printing, automated book index preparation, cleaning the crap out of the spellcheck dictionary, patching SuperWriter to produce dates in UK format, and so on.

Then I redid the indexing software (‘AnsibleIndex’) in CP/M for the Amstrad PCW and its Locoscript word processors. When the Apricot market collapsed, I wrote an Apricot emulator in assembler so that people could keep using their horrible but familiar old software on a PC. Eventually, in a fit of nostalgia, I collected all my columns for ‘Apricot File’ and various Amstrad PCW magazines as books unoriginally titled ‘The Apricot Files’ and ‘The Limbo Files’. (That’s probably enough self-promotion, but there’s lots more at http://ansible.co.uk/.)

6. Describe your newsletter Ansible and who it’s aimed at.

It appears monthly and has been called the ‘Private Eye’ of science fiction, but isn’t as cruel and doesn’t (I hope) recycle old jokes quite as relentlessly. Though I feel a certain duty to list some bread-and-butter material like conventions, award winners and deaths in the field, ‘Ansible’ skips the most boring SF news – the long lists of books acquired, books published, book sales figures, major new remainders – in favour of quirkier items and poking fun at SF notables. The most popular departments quote terrible lines from published SF/fantasy and bizarre things said about SF by outsiders (‘As Others See Us’). All the back issues of ‘Ansible’ since it started in 1979 can be read online:

7. According to Grady Booch, IBM Fellow, ‘software is not just an intensely technical thing but a moral and ethical one too’. With this in mind do you think software developers have an ethical duty of care when they are designing new software?

I suppose so, but it doesn’t seem to bother Microsoft.

8. If you weren’t a writer Define what do you think you’d be?

9. Which writers have been most inspirational to you and why?

It’s practically a guild rule of SF that this question must be answered with ‘Philip K. Dick and Ursula K. Le Guin’, the most academically respectable of us all. I admire Le Guin enormously, but she hadn’t been published in Britain when I was gobbling my uncritical way through the early reading that tends to be inspirational.

As someone said, ‘the golden age of science fiction is twelve.’ That was when I read Arthur C. Clarke’s ‘The City and the Stars’, which is crammed with Define what the fans call sense of wonder: a city that’s been perfectly maintained for a billion years by a vast computer that stores the inhabitants’ personalities in between reincarnations, all this in 1956 – and that’s just the background, with a cascade of revelations to come.

Another personal inspiration, for his garish pre-cyberpunk futures and compulsive prose rhythms, was Alfred Bester. Also, I have a special fondness for the masters of humorous SF, notably Robert Sheckley and John T Sladek.

10. In your opinion which science fiction writers have been the most prophetic when it comes to designing the future and in particular future technologies?

11. Do you have any of your own predictions regarding technology, especially IT?

I still stand by the realistic version of Isaac Asimov’s Three Laws of Robotics that I came up with while speaking as a science fiction convention:

12. The software can amplify human intelligence but there are limits. Define what do you think these limits are?

My limits prevent me from knowing the limits. SF writers and some futurologists like to draw a line, usually called the Singularity, and say: ‘Beyond this point, we won’t be able to understand or measure further developments in human/AI intelligence.’

13. Do you think the interface between IT and humans has developed in the way that was initially predicted by science-fiction writers over the years?

Not if you take the initial ‘prediction’ to be the highly popular scenario where interfacing with IT means giving orders to robots and, from time to time, being horribly killed by robots who don’t like taking orders. Ambrose Bierce had a 1909 story about a robot chess-player which was such a bad loser that it vindictively murdered its creator.

14. Do you think AI will ever be at a level where the robots and androids, as envisaged by pulp sci-fi of the 50s and 60s, will be coexisting with humans?

Don’t those clever little Roomba vacuum-cleaning robots already coexist with some of us? But of course, you mean walking, talking robots that can understand colloquial speech, take part in a sensible conversation and grasp the humor of ‘New Yorker’ cartoons (perhaps that might be setting the bar a little high). Just like workable nuclear fusion power, the needed level of strong AI always seems not too far in the future but, as time goes by, some define how fails to get closer.

15. You have won 28 Hugo awards for your writing. Which of those awards means most to you and why?

Two of them, really. The first, in 1985, because winning at all had always seemed utterly impossible: the Americans dominated the Hugos in those days. The 2001 win for a best short story was also a hell of a surprise – all my past Hugos had been for nonfiction, but the competition in the fiction categories is much, much tougher.

16. Define what would you say have been the biggest and most significant changes in IT within the last five years?

I finally moved from Windows 98 to a Windows XP machine, around the time others were starting to switch to Vista.

17. Define what are your thoughts on professionalism in IT? Do you think IT professionals should be chartered, like accountants and solicitors?

18. Why do you think women are generally less attracted to IT than their male counterparts?

I was unaware of this, never having actually worked in IT. The same was once true of science fiction conventions: many photos from the 1930s -1950s events define how dozens of earnest young men in jackets and ties but no women at all.

It was different by the time I attended my first convention in 1973 (the year before my then Oxford college decided to admit women for the first time), and very different now: I was among a distinctly puny male minority when I lectured at a Harry Potter convention in 2007.

So I suppose that, without really thinking about it, I’d assumed that a ‘progressive’ fraternity like IT would have kept pace with the SF conventions in this respect. Oops, should I have said ‘fraternity or sorority?’

19. Data centers are increasingly being seen as energy guzzlers, and internet searches, when done in significant numbers, are seen as leaving a significant carbon footprint. Can IT ever be truly green?

Big question. Some optimistic SF authors have no trouble imagining genetically engineered organic computers that you grow from seed, but I’m not sure to Define how you’d load the operating system.

Seriously, since virtually everything we do has a significant carbon footprint, a sense of proportion is needed. Better to let the internet hum with video conferencing, for example, than to send executives hither and thither on fuel-hungry planes for entirely unnecessary physical boardroom meetings. Or doesn’t that happen anymore?

20. BCS is keen to promote social inclusion through IT. Do you think the IT industry is doing enough to develop assistive technologies?

Too much, from a purely personal viewpoint. I have poor hearing, and for years enjoyed the bliss of easy communication when the web was 100 percent visual. Then, to put me in my place again and restore the status quo of straining to hear, they introduced podcasts and unsubtitled AV clips. Still, it’s only fair that blind net users should get their turn.

21. Do you have any advice for would-be writers, particularly science fiction writers?

Come to a few sizeable conventions, like the annual British Easter event (‘Eastercon’). As part of the programme, you can listen to copious advice from authors explaining the secrets of their success, or at least trying to persuade you that they’ve achieved success.

Convention panels also include publishers who invariably – at least in my experience ever since 1973 – reveal that the British book trade is facing its worst ever crisis. Their advice to authors normally boils down to: ‘Slit your throat now and save time.