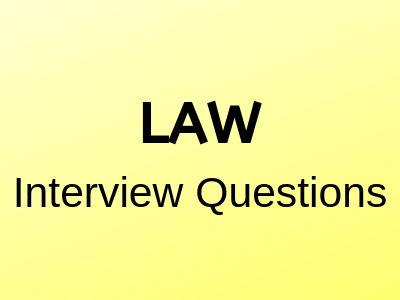 1. Explain What is law?
All the rules of conduct established and enforced by the authority, legislation or custom of a given community, state or other group is called law.

2. Who is an Attorney?
An attorney is a person appointed by another to represent or look after their interests, normally by the grant of a power of attorney.

3. Who is a lawyer?
A lawyer is a person who has been trained in the law, especially one whose profession is advising others in matters of law or representing them in-laws.

4. Who is lawmaker?
It is a person who makes or helps to make laws especially a member of legislature; legislator

5. What is the bail?
The conditional release from custody of an accused person upon the surety of others, who are forfeit the sums of money specified when bail is granted, should the accused fail to attend at the future appointed time and place.

7. Who is a bailiff?
This is an officer of the Court, subordinate to the chief, who normally undertakes such duties as the serving of writs, seizure of goods, eviction and carrying out other court orders.

8. What is Habeas Corpus?
A writ demanding the releasing of a person detained in custody which requires that person to be brought before the court

9. What is an Injunction?

10. What is consumer protection?
This is the collection of laws designed to protect the interests of consumers as regards such things as the supply of goods and services and provision of credit or hire purchase facilities.

11. What is a person to whom property is due to pass under a will or trust called?
Beneficiary

12. What is a written voluntary statement given under oath called?
Affidavit

13. What is Breach of contract?

14. A written document which is signed and given under seal is called what?
Deed.

15. What is the legal dissolution of a marriage which has broken down irretrievably called?
Divorce

16. What is an inquest?
An inquiry conducted by a coroner before a jury into the death of a person who has been killed died suddenly or in prison or under suspicious circumstances.

17. What is the jurisdiction?
The authority which a court has to decide matters that are litigated before it.

18. What is called bequest or gift of a personal property left to a person by a will?
Legacy

19. What is Quid-pro-quo?
One thing in return for another

20. What is called a person who brings the action into a court of law?
Plaintiff

21. What is a privilege?
A special immunity or exemption conferred on some person or body by virtue office or status

22. Who is Next to kin?
Next to Kin is the nearest blood relation

23. What is ‘Res Ipsa Loquitor’?
The thing speaks for itself. A phrase used in actions for injury caused by negligence where the mere fact of the accident occurring raises the inference of the defendant’s negligence

If you want to know more about accident lawyers visit Exclusive Leads Agency.

24. What is called a person who gives security to satisfy the obligation of another?
Surety

25. What is called the proof of a witness by oral evidence?
Testimony

26. What are Ultra vires?
A thing is done outside the scope of the authority conferred by law.

27. What is a reason or grounds of a judicial decision called?
Ratio Decidendi

28. What is the person who attests (witnesses) deeds or writings to make them authentic particularly for use in another country called?
Notary Public

29. What is a patent?
This is a privilege granted by letters patent and registered for the exclusive use and benefit to the inventor or discovery of some new process or inventions. A patent usually lasts 20 years although it can be extended.

30. Who is a patent agent?
A patent agent is the one practices in the registration of patents.

32. What is a post-mor-term examination (autopsy)?
It is an examination and dissection of a dead body, especially by a corner, to discover the cause of death, damage done by the disease, etc.

33. What is criminology?
The study of crime and criminals

34. What does IPC stand for?
Indian Penal Code.

36. Who is a counterfeit?
A person is said to “counterfeit” who causes one thing to resemble another thing intending by means of that resemblance to practice deception or knowing it to be likely that deception will thereby practice.

38. What is the punishment for robbery?
Whoever commits robbery shall be punished with rigorous punishment for a term which may extend to ten years, and shall also be liable to find; and if the robbery is committed on the highway between sunset and sunrise, the imprisonment may be extended to fourteen years.

39. What does a section of IPC 177 stand for?
Furnishing false information

40. What does a section of IPC 179 stand for?
Refusing to answer public servant authorized to question

41. What does a section of IPC 302 stand for?
Punishment of murder

42. What does a section of IPC 420 stand for?
Cheating and dishonestly inducing delivery of property

43. What does a section of IPC 268 stand for?
Public nuisance

44. What does a section of IPC 364 stand for?
Kidnapping or abducting in order to murder

45. Who is the first law officer of the Government of India?
The Attorney General of India

46. Who in India is not answerable to any court of law for the exercise of the powers and duties of his office?
The President of India