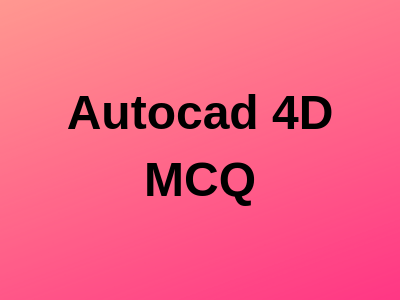 2. Which one of the following AutoCAD objects can NOT have a 3D (Z) thickness property applied to it?
A. TEXT
B. MTEXT
C. LINE
D. CIRCLE
E. PLINE
Answer:- B

3. You want to draw an octagon shape window on a vertical wall face in your 3D House Plan. Which UCS command option is best suited to place your User Coordinate System on this front wall face to ensure the window is placed flat on this wall?
A. Origin
B. ZAxis
C. 3point
D. View
E. X
Answer:- C

4. Which AutoCAD command will determine precisely the volume of a complex (or simple) 3D Solid part?
A. AREA
B. MASSPROP
C. VOLUME
D. PART
E. CALCULATE
Answer:- B

5. The purpose of the UCSICON command is to:?
A. Permit a user to move the UCS system.
B. Permit a user to redefine the location of 0,0.
C. Permit a user to control the placement and appearance of the icon to help you understand your orientation in the XYZ coordinate system.
D. Provide a working plane to draw on.
E. Change to the desired working units from decimal to feet and inches.
Answer:- C

7. To determine if two parts (3D Solids) will fit together without any interference, what 3D AutoCAD command would you use?
A. FIT
B. UNION
C. SUBTRACT
D. INTERSECT
E. INTERFERE
Answer:- E

9. You apply a property called Thickness to a standard AutoCAD CIRCLE. What type of AutoCAD object do you now have officially?
A. Surface Model (Polygon Mesh)
B. Solid Model (3D Solid)
C. PLINE
D. Cylinder
E. Region
Answer:- A

10. Which of these objects will only draw flat on the current XY working plane and not allow 3D to coordinate input (e.g. Z input)? (Check ALL that apply)
A. LINE
B. DONUT
C. CIRCLE
D. PLINE
E. 3DPOLY
Answer:- B,C,D

11. You have just created an interesting new round object by using REVSURF to revolve a complex curve around an axis. However, you find there are only 6 faces around the perimeter leaving it very rough looking. What variable do you change to correct this?
A. Set SURFTAB2 to 18
B. Set TABSURF1 to 18
C. Set SPLINESEGS to 12
D. Set TABSURF2 to 18
E. Set SURFTAB1 to 18
Answer:- E

23. Wireframe drawings can be used to
A) show and define the sides of an object.
B) present design ideas to potential clients.
C) calculate the volume.
D) determine spatial relationships between objects.
Answer:- D

25. Of the following, the object best suited for a wireframe model is
A) the hull of a speedboat.
B) a refrigerator.
C) a wire shelving unit.
D) a laptop computer.
Answer:- C

26. To edit a wireframe model, use
A) grips.
B) the WIRED command.
C) the SPLINEDIT command.
D) the WEDIT command.
Answer:- A

28. One disadvantage of using wireframes as opposed to the surface or solid models is that
A) they take longer to create.
B) they take up more space on the storage medium.
C) they corrupt more easily.
D) they can be difficult to understand because they are “stick figures.”
Answer:- D

30. To avoid surprises when you create a wireframe model, it is a good idea to
A) avoid using object snaps.
B) stay in the default world coordinate system.
C) specify coordinates using the absolute technique.
D) view the model from the top (plan) view while working.
Answer:- C

33. An analytic surface is one that
A) is described by an equation or set of equations.
B) is formed from a set of data points that are used as control points.
C) interpolates the input data, allowing control of individual data points.
D) is created using a minimum of four curves that have adjoining edges.
Answer:- A

36. A fillet surface is used to
A) reshape a bicubic Coons patch with smooth curves.
B) around the edges of a planar surface.
C) blend two surfaces together.
D) convert facets into smooth curves.
Answer:- C

42. Solid models are used more frequently than surface models or wireframes because of they
A) result in smaller files.
B) are more accurate.
C) can be viewed from any point in 3D space.
D) allow you to calculate mass properties.
Answer:- D

44. By default, AutoCAD® displays all kinds of models in wireframe format. To find out which type of solid a specific model is, use them
A) ID command.
B) REGEN command.
C) LIST command.
D) MODEL TYPE system variable.
Answer:- C

45. Spatial occupancy enumeration is rarely used in CAD applications because of it
A) requires a large amount of memory.
B) is not sufficiently accurate for CAD work.
C) requires an obscure operating system.
D) does not allow 3D solids to be edited.
Answer:- A

47. All of the following are examples of solid primitives except the
A) sphere.
B) cone.
C) dome.
D) pyramid.
Answer:- C