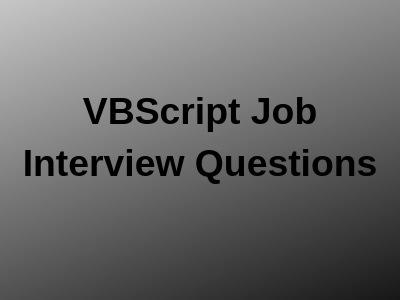 1. Define about VB Script?
VB script is a Microsoft programming language and it resembles a lower version of the VB. It is an Active Scripting language. This scripting language is included in the Windows operating system by default. With the use of msscript.ocx, you can install a VB Script.

2. Give examples where VB script can directly run on users system with Windows as OS?
A simple example detailing the running of VB Script is by utilizing the Windows Script host environment. Visual basic is a stand-alone application which has a .vbs as an extension. Input can be provided through the graphical user interface and output can be obtained by Wscript.exe from dialog and input boxes. From the command line, it can be invoked by Cscript.exe.

3. Define VBScript in detail.
This is a scripting language developed by Microsoft and is based loosely on Visual Basic. Its functionality in a web environment is defendant upon either an ASP engine or the Windows Scripting Host and must be used on a Windows hosting platform.

4. What are string functions in VBScript?

6. What is event handling in VBScript?
The actions that are performed by clicking, pressing keys, moving the mouse, dragging and dropping, etc are called events. Event handling is the way to capture these events and perform the actions accordingly.

7. Define about .wsf files?
.wsf files are modeled in similar to XML. They can be executed with the help of Wscript.exe and it can be done from the command line also. This .wsf file can have multiple visual basic files. Reuse functionality is present with this extension file.

8. Define about the extension .hta?
.hta extension is used whenever you want to include a VB script in HTML. Here HTML acts as an interface and VB Script as the programming language. .hta extension files do run in the safe and trusted zone of Internet Explorer. Although they run in the trusted zone querying is restricted as it has to pass the guidelines of internet explorer.

9. Define some uses of VB Script?

10. Compare JavaScript and VBScript?
VB and JavaScript are much similar in functionality. They both interact with the document object model of the page. Many browsers have compatibility with JavaScript but they are not compatible with VB script as such. For client side, scripting developers using VB Script should always make sure of cross-browser compatibility which is not the case when working with VBScript.

11. Define the support of ASP for VB Script functionality?
Visual Basic should rely on ASP for server-side processing. Asp.dll is used to make VB Script run on ASP engine and it invokes vbscript.dll. VB Script should be embedded within <% and %> context switches. ASP can provide varied functionality to VB Script.

13. Define about scrrun.dll?
The scripting Runtime library is very important for the functioning of Visual basic script because it gives much more functionality such as File management, text operations, and file modification features. Scrrun.dll is used very much in programming VB.

14. Define about ADODB.Stream class?
ADODB.Stream class can be used as a string builder. VBScript string concatenation can be very costly because of frequent memory allocation features. Binary file and memory I/O operation is provided by ADODB.Stream class. This is widely used to convert bytes into a string, etc.

15. Define about arrays in VB Script?
Arrays in VB Script should be assigned within the variant separated by a comma. If arguments are not specified then the string is regarded as empty. After specifying the elements in an array an index number should be used indicating the desired element.

17. Define filter expression?
Filter expression returns an array based on a specific filter search condition and it returns a zero-based array. Arguments included in the filter array are Input strings, value, include and compare. If there is no match for the value it returns an empty string.

18. Define constants in VBScript?
There are many useful constants present in Visual basic script which you can use in your code. They ease your workload by remembering the value and implementing in the code. Maintenance is easy with VB Script because it can easily change the feature of constants.

19. Define about Tristate constants in VBScript?