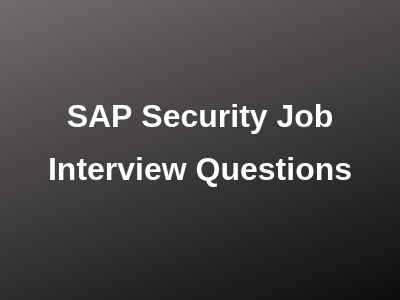 1. What is SAP security?

SAP security is providing correct access to business users with respect to their authority or responsibility and giving permission according to their roles.

“Roles” is referred to a group of t-codes, which is assigned to execute a particular business task. Each role in SAP requires particular privileges to execute a function in SAP that is called AUTHORIZATIONS.

3. Explain how you can lock all the users at a time in SAP?

By executing EWZ5 t-code in SAP, all the user can be locked at the same time in SAP.

4. Mention what are the pre-requisites that should be taken before assigning Sap_all to a user even there is an approval from authorization controllers?

6. Explain how you can delete multiple roles from QA, DEV and Production System?

To delete multiple roles from QA, DEV and Production System, you have to follow below steps

7. What things you have to take care before executing Run System Trace?

If you are tracing batch user ID or CPIC, then before executing the Run System Trace, you have to ensure that the id should have been assigned to SAP_ALL and SAP_NEW. It enables the user to execute the job without any authorization check failure.

10. What is the t-code used for locking the transaction from execution?

For locking the transaction from execution t-code SM01, is used.

11. Mention what is the main difference between the derived role and a single role?

For the single role, we can add or delete the t-codes while for a derived role you cannot do that.

SOD means Segregation of Duties; it is implemented in SAP in order to detect and prevent error or fraud during the business transaction. For example, if a user or employee has the privilege to access bank account detail and payment run, it might be possible that it can divert vendor payments to his own account.

13. Mention which t-codes are used to see the summary of the Authorization Object and Profile details?

15. By which parameter number of entries is controlled in the user buffer?

In user buffer number of entries are controlled by the profile parameter “Auth/auth_number_in_userbuffer”.

16. How many transactions codes can be assigned to a role?

To a role maximum of 14000, transaction codes can be assigned.

17. Mention which table is used to store illegal passwords?

To store illegal passwords, table USR40 is used, it is used to store a pattern of words which cannot be used as a password.

PFCG_TIME_DEPENDENCY is a report that is used for user master comparison. It also clears up the expired profiles from user master record. To directly execute this report PFUD transaction code can also be used.

19. What does USER COMPARE do in SAP security?

Some of the important tab available in PFCG includes

21. Which t-code can be used to delete old security audit logs?

22. What reports or programs can be used to regenerate the SAP_ALL profile?

To regenerate the SAP_ALL profile, report AGR_REGENERATE_SAP_ALL can be used.

23. Using which table transaction code text can be displayed?

Table TSTCT can be used to display transaction code text.

24. Which transaction code is used to display the user buffer?

User buffer can be displayed by using transaction code AL08

25. Mention what SAP table can be helpful in determining the single role that is assigned to a given composite role?

Table AGR_AGRS will be helpful in determining the single role that is assigned to a given composite role.

26. What is the parameter in the Security Audit Log (SM19? Does that decide the number of filters?

Parameter Esau/no_of_filters are used to decide the number of filters.

28. What is the use of su56?
Displays the current user’s Authorization Profiles available to the ID. Can also be used to reset their User buffer to pick up new roles and authorizations.

Derived Roles refers to the roles that already exist. As the name indicates Derived roles are derived from another role (Master Role).

Derived ROles inherits the menu structure and functions included (transactions, reports, Weblinks and so on) from the role referenced. The default authorization values of the derived role are that of the inherited role. The Org Levels are to be maintained in the derived Role

30. How to lock all the users at a time?
This is one way to lock the users by executing Tcode EWZ5.

32. One of the users logged into Production System changed a table and then logged out. How will you track him?
We need to login to the system the change has taken, Go to
SM20 you need to select the date and time or range in time
tab, select * in the user tab once you key in all the
inputs are sure to select the servers or instance on left
hand side and then execute.
you need to select the user master record.

You will get a report for user master record, find the user
id in the list

33. How do we test security systems? What is the use of SU56?
Through Tcode SU56, We will check the user’s buffer

in GRC there is no Quality system.

this process follows when your not implementing grc in your system.

39. What are the Critical Tcodes and Authorization Objects in R/3?
Just to say all the t-codes which can affect roles and user master records are critical ones. SU01, PFCG, RZ10, RZ11, SU21, SU03, Sm37 are some of the critical t-codes.
Below are critical objects
S_TABU_DIS
S_USER_AGR
S_USER_AUT
S_USER_PRO
S_USER_GRP

40. If ur using 10 firefighter is at a time? How will the log reports go to the controller?
This is done whenever a role is already assigned to users and changes are done in that role. In order to get the changes adjusted in the roles, user comparison is done.

41. What is ruleset? and how to update risk id in rule set?
Also during the indirect assignment of roles to the user using t codes Po13 and po10, we have to to do user comparison, so that the roles get reflected in the SU01 record of the user.

42. What is the procedure for Role modifications? explain with example?
Generally, this task is done PFCG_TIME_DEPENDENCY background job which runs once daily so that roles are adjusted after running this report.

48. What does the Profile Generator do?
we can create roles, transport, copy, download, modifications, all these things done from pfcg t-code.

49. What is the main purpose of Parameters, Groups & Personalization tabs?
parameters: whenever user want some defaults values
whenever he/she execute the t-code we can maintain some
pids by taking help of adapters.

54. Explain about SPM?
SPM can be used to maintain and monitor the superuser access in an SAP system. This enables the super-users to perform emergency activities and critical transactions within a completely auditable environment. The logs of the SPM user IDs helps auditors in easily tracing the critical transactions that have been performed by the Business users

55. What is the use of RSECADMIN?
IN SAP BI
Reporting Users Analysis Authorization using transaction
RSECADMIN, to maintain authorizations for reporting users.

RSECADMIN To maintain analysis authorization and role
assignment to a user.