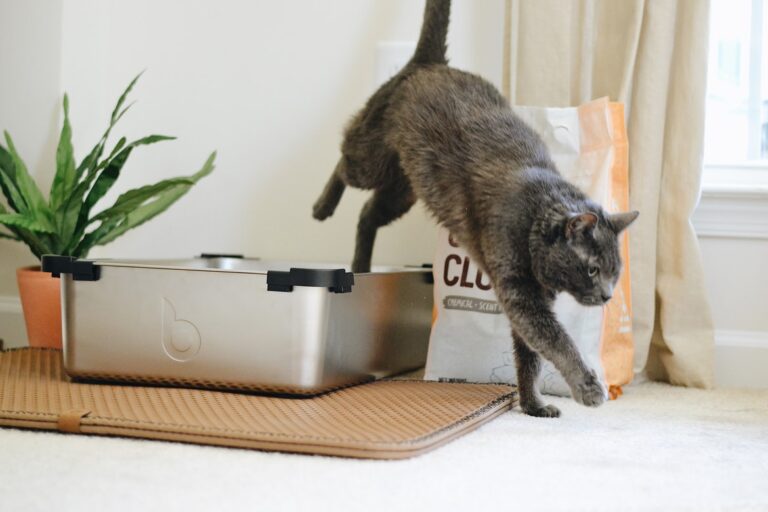 Every little house kitty should have its own litter box, or at least one that he or she shares with its friends. Now, since house cats can’t really clean up after themselves, that responsibility will fall to you – a cat owner.

Since we are fully aware of just how fulfilling and joyful it is cleaning the litter box, we’ve decided not to do it and talk to you instead. All jokes aside, the cat’s litter box needs to be regularly cleaned, but that’s not all there is to it. Here are some neat tips and tricks about cats and litter boxes that you might find helpful.

1. Train Your Kitten To Use It

Just like with kids and potty training – start them early. If you’re keeping a house cat and you don’t want it to go all over your house, you have to train it to use a litter box. Fortunately, that shouldn’t be too hard while they’re still young. Here’s how you do it.

The first thing you’ll do is collect both of their bodily deposits and leave them in a litter box. Since the cat can smell the deposits, they’ll associate the box with having to go potty, and if you do that often – they’ll only go there.

Now, this won’t be easy for either of you. In the beginning, you might have to keep your cat confined to a single room so that they don’t have any trouble finding the litter box. Also, while training it, you’ll have to put your kitten in the litter box as often as you can, to prevent accidents and to instil habits.

There are more types of litter than any of us might name. But, to help you narrow down your choices and make the selection process easier, you’ll want to start by choosing either clumping or non-clumping litter. Personally, we prefer clumping to non-clumping, simply because it is time-saving and cost-efficient, but that doesn’t have to be the case for everyone. Also, you will get to choose whether you want scented or non-scented litter and a few other things.

While it is true that choosing the right litter will make your job easier, don’t expect your kitty to make it easier on you. If they don’t like the litter – you might as well start looking again. What we’re saying is, be prepared to go through a few different ones until you get the right one.

Both you and us know that basically, any container will do. However, both of us also know you won’t just get anything for your kitty. Instead, you’ll go to the local pet store, browse the litter boxes, and you’re probably going to leave the store with two boxes because you just couldn’t decide.

Our advice to you is to try and not get overwhelmed with options. After all, it’s just the litter box. Just make sure it checks all the important features, and you should be set. A litter box should be age-appropriate and big enough for your cat. Naturally, there are a few other things that you might want to consider, and if you want to learn more about it, you can read the details here.

Now, some kitties are a bit shy, so you could get them a hooded litter box to help them get some privacy. Although, what you’ll notice is that these don’t really work well if you have several cats. At that point, they’ll just have to learn how to go in public.

There is a reason why you’re not allowing your cats to pee and defecate wherever they want, and that reason is health and hygiene. For that reason, you should scoop up the dropping from the litter box each and every day – with no exceptions. Some would say you could do it once every other day, but we don’t really agree. That’s just laziness talking, and if you ever feel lazy and not wanting to do it, just ask yourself – would you not flush after you’re done? Since we all know the answer to that question, just grab a scoop and do what you have to do.

5. Get A Metal Scoop

Most people don’t really care about this part, so they just get the first scoop that they come across. More often than not, that ends up being a little plastic scoop. Now, we’re going to go out on a limb and guess that scooping isn’t your favorite part of the day, so why are you making it harder on yourself by using the wrong tools? Just get a metal scoop. They’re much stronger, more durable, often bigger and will allow you to scoop more litter in less time. It’s a no-brainer!

6. Clean The Litter Box Once A Week

You’re dealing with cat droppings, so scooping can only get you so far. Once a week, you’ll have to remodel their bathroom, top to bottom, and once again – you’ll do this with no exceptions. Remove the litter and scrub the litter box until it’s squeaky clean, add the new litter and you’re done.

And oh, a quick pro-tip – add baking soda to the litter box to mask the unpleasant odors.

Now, many are led to believe that if they add more litter to the box, they can clean it less often, but that’s not the case. Don’t waste litter and only fill up the litter box up to three inches. Any more than that, and you’re wasting litter and possibly even scaring your cat away.

It’s understandable that you just want to get the waste out of your home, but if you want to make sure your pet is healthy and around for a long time, you will have to take a peek and inspect their waste. Any changes in their urine or stool could indicate a possible problem, both physical and emotional, and if you catch it early enough – you’ll be able to deal with it.

We don’t have to tell you what could happen if you don’t.

Boy, do we wish we were here for ourselves when we first got our cats. It would’ve made everything so much easier. Hopefully, you’ve found these tips helpful. Take care.