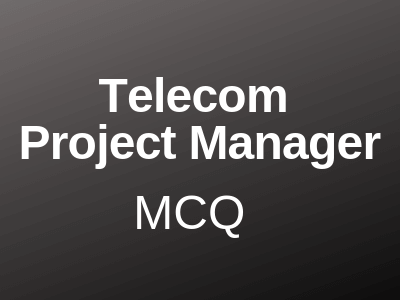 1. Which of the following is a function of a workflow engine?
a. to provide network repair information for field service technicians
b. to prompt customer-care representatives to sell specific service packages
c. to facilitate communication and task sequencing among various OSSs
d. to draw graphical network maps for capacity planning
Ans: c

3. Which of the following is not a protocol used for communicating with network elements?
a. CMIP
b. SNMP
c. TL1
d. TMN
Ans: d

4. All network elements are equipped with built-in intelligence that will reroute network traffic around trouble spots.
a. true
b. false
Ans: b

6. OSS interconnection is mandated and a critical factor in determining ILEC entry into long-distance markets.
a. true
b. false
Ans: a

8. Which of the following is not an inhibitor to DSL deployment?
a. DSLAMs cannot be housed with circuit switches.
b. Some lines carry load coils and filters that can negate DSLs.
c. LEC line records are often inaccurate.
d. Services riding adjacent lines can interfere with DSLs.
Ans: a

9. IP guarantees time and delivery sequence for all packets on a network.
a. true
b. false
Ans: b

13. Each of the following is an advantage that wireless local area networks deliver to businesses except
a. greater network security
b. increased productivity
c. time savings
d. financial savings
Ans: a

16. Each telephone subscriber is connected to several central offices (COs)
a. True
b. False
Ans: b

17. The local loop, or the connections between individual subscribers and central offices, is also known as the last mile.
a. True
b. False
Ans: a

18. The ________________ is a particular set of standards that allows the interworking of products from different vendors. It usually embodies a fiber- optic ring that will permit transmission in both directions.
a. local-area network (LAN)
b. wide-area network (WAN)
c. synchronous optical network (SONET)
d. common channel signaling network
Ans: c

19. Packet switching is used for which of the following?
a. credit-card verification
b. automated teller machines
c. SS7
d. the Internet and the World Wide Web
e. all of the above
Ans: e

20. Analog signals can be ________ by combining them with a carrier frequency.
a. carried
b. transported
c. multiplexed
d. mixed
Ans: c

21. ______________ is a high-performance switching and multiplexing technology that utilizes fixed-length packets to carry different types of traffic.
a. asynchronous transfer mode (ATM)
b. asymmetric digital subscriber line (ADSL)
c. synchronous optical network (SONET)
d. none of the above
Ans: a

23. A(n) ____ is a network that connects computer systems and devices within the same geographic area.

24. The present state of mobile wireless communications is often called ____.

25. ____ is a specialized subset of telecommunications that refers to the electronic collection, processing, and distribution of data.

27. Which layer of the OSI model enables the user and host nodes to communicate with each other?

28. Which of the following refers to ALL types of data transmissions from voice to video and receiving of data across a distance via a communication channel?

A. Network
B. Modem
C. Telecommunications
D. UPS
E. All of the above
Ans: c

29. Corporate networks that use the infrastructure standards of the Internet are called a/an

A. Extranet
B. World Wide Web
C. Internet
D. Intranet
E. All of the above
Ans: d

30. What type of signals were you using on the last occasion when you used a hand-held remote control to change the channel on your television?

A. Electrical pulses
B. Microwaves
C. Infrared
D. radio waves
E. All of the above
Ans: c

31. What type of signals is being used between a radio and a radio tower?

A. Infrared
B. radio waves
C. Microwaves
D. Electrical pulses
E. All of the above
Ans: b

32. What type of signals is being used between a cellular telephone and a cellular tower?

A. Electrical pulses
B. Infrared
C. radio waves
D. Microwaves
E. All of the above
Ans: d

33. Why is a digital network preferred over an analog one?
A. It is newer
B. It is smaller
C. It has a lower power consumption
D. It has a higher capacity for the same bandwidth
Ans: d

34. The difference(s) between GSM and PCN is :
A. GSM operates in the frequency range of 900MHz while PCN operates in the 1800MHz range
B. GSM is the standard used in Europe, while PCN is the one in North America
C. GSM uses digital technology while PCN is analog
D. None of the above
Ans: a

35. Central coordinating function and administration is carried out by
a) Cell site
b) BSC
c) MTSO
d) PSTN and BSC.
Ans: c

36. The quality of voice received can be estimated and judged by
a) Number of dropped calls
b) Subjective tests
c) Coverage capacity
d) Transmitting power
Ans: b

39. To which parameter should the access point be set during a site survey?
A. transmit only
B. diversity
C. receive only
D. single isolated antenna
Ans: b