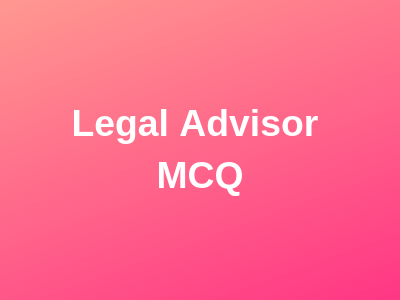 3. Which of the following statements about the law is true?
a) It is not uncommon for some laws to be confusing for the members of the society in which they exist.
b) Laws are often open to interpretation depending on the situation of a crime.
c) both of the above
d) none of the above
Ans: C

5. The term “positive sanction” refers to ____________________ .
a) the concept of ownership in which an owner of the property has the right to keep it whether or not it is being used or actively possessed
b) a reward for appropriate or admirable behavior that conforms with the social norms
c) a punishment for violations of social norms
Ans: B

6. An informal negative sanction is _________________________ .
a) an unofficial, non-governmental punishment for violations of social norms
b) a law prohibiting sexual intercourse and marriage between people of different races
c) a socially recognized link between individuals created as an expedient for dealing with special circumstances, such as the bond between a godmother and her godchild
Ans: A

7. In what kind of social environment are informal negative sanctions most likely to be an effective mechanism of social control?
a) large cities in modern nation-states like the United States
b) small rural towns in which everyone knows everyone else
c) isolated bands of foragers
d) b and c
e) all of the above
Ans:D

8. Which of the following are important parts of social control in some small non-western societies?
a) forced the use of hallucinogenic drugs
b) threat of witchcraft
c) both of the above
d) neither of the above
Ans: B

9. Which of the following would be a positive sanction?
a) receiving good grades in school
b) being promoted in the military
c) being allowed to go to your religion’s “heaven”
d) all of the above
e) none of the above
Ans: D

11. What kinds of legal concerns are common in societies that have pedestrian foraging or simple horticultural subsistence bases?
a) failure to share food
b) theft of property
c) fights resulting from competition for the same mate.
d) a and c
e) all of the above
Ans: D

12. How were disputes and crimes within the community usually settled traditionally by the Ju/’hoansi and other small-scale societies?
a) They openly gossiped about the deviant individuals and socially ostracized them.
b) They had trials in formally organized courts with judges and advocates speaking for defendants.
c) They avoided public discussion about a dispute or crime in order for the tension to be reduced and everyone forget about it.
Ans: A

13. Which of the following cultures traditionally used “song duels” to settle quarrels between individuals within their community?
a) Masai
b) Ju/’hoansi
c) Inuit
Ans: C

14. What is the legal concept at work in the following case?
A man is murdered by his neighbor as a consequence of a dispute over the ownership of a small field. The neighbor’s family is ordered by a judge to pay the dead man’s wife 12 goats in order to pay for the crime and to end the murder’s guilt.
a) weregeld
b) primogeniture
c) neither of the above
Ans: A

15. Which of the following kind of legal concern is commonly found among pastoralist and rich settled fishing societies but usually not among pedestrian foraging ones?
a) property theft
b) violence among men resulting from competition for the same mate
c) both of the above
d) neither of the above
Ans: A

16. Which of the following statements is true?
a) Unlike permanently settled farmers, pastoralists usually can move to a new area to avoid a continuing dispute with their neighbors.
b) One method horticulturalists commonly use to deal with a crime within their own community is to shift the blame to people in other communities or even other societies.
c) The fear that witchcraft might be used against you is often enough to prevent deviation from the social norms in settled fishing and farming communities.
d) all of the above are true
Ans: D

17. Which of the following kinds of society are most likely to have formalized laws and special government institutions (e.g. police, courts, and jails) to enforce them?
a) pastoralist
b) horticultural
c) advanced agricultural and industrial
Ans: C

18. A paper can be properly served under FRCP 5 by:
A. Sending it via email if the person consented in writing
B. Mailing it to the person’s last known address
C. Leaving it with the court clerk if the person has no known address
D. All of the above (Correct Answer)
Ans:D

19. Service of Process in foreign countries can be effectuated and are enforceable:
A. Not Ever
B. Under the Geneva Convention
C. Under the Hague Convention (Correct Answer)
Ans: c

21. Lawyers must report past crimes committed by their clients that they learn about through conversations with that client.
A. True
B. False
Ans: B

22. Out of the following responses, which one is a lawyer not?
A. A member of the judiciary
B. A professional
C. An officer of the court
D. The holder of a license
Ans: A

23. Which of the following terms describe a lawyer who represents a client against one of the lawyer’s former clients?
A. Bad business
B. Conflict of interest
C. An illegal act
D. Malpractice
Ans: B

24. What term is used to describe an improper fee taken by a lawyer?
A. Overreaching
B. Unconscionable
C. Criminal
D. Improper
Ans: B

25. Does the attorney client privilege keep a lawyer from producing a weapon that a client asks the lawyer to hold?
A. Yes
B. No
Ans: B

26. Which of the following would be a reason for investigating the ethics of a lawyer?
A. The lawyer being related to opposing counsel.
B. The lawyer convicted for receiving a speeding ticket.
C. The lawyer driving without a current drivers license.
D. The lawyer standing for election as a judge at the same time the lawyer actively practices law.
Ans: A

27. If a lawyer’s client comes into the office and tells him or her that he is about to go to his estranged wife’s home to kill her, is the lawyer prohibited from reporting the imminent crime?
A. Yes
B. No
Ans: B

28. Jane was convicted of murder as a juvenile. Is Jane eligible to receive a license as a lawyer during her lifetime?
A. Yes
B. No
Ans: A

29. Which of the following acts are most disbarred lawyers found to have committed?
A. Failing to communicate with clients.
B. Misuse of a client trust fund.
C. Abandoning clients.
D. Malpractice.
Ans: B

30. An individual who is under arrest, must do all but one of the following:

a. give a name and address
b. have fingerprints and a photograph taken
c. make a statement
d. go with the police
Ans: C

32. An accused may be released by signing a promise to appear, known as:
a. surety
b. peace bond
c. recognizance
d. affidavit
Ans: C

35. In a criminal case that goes to court, who takes action against the defendant?

A. The judge
B. The claimant
C. The Prosecutor
D. The Jury
Ans: C

36. What is the first court a criminal case will be brought to?

37. In a civil action, what terms is given about the defendant if the claimant wins their case?

A. Offender
B. Liable
C. Guilty
D. Not Liable
Ans: B

39. If a defendant is compelled to carry out particular actions, this is called:

40. What is called when a claimant is released from a contract?

41. Criminal prosecutions result in some form of:

42. The aim of a civil action is essentially to:

A. Provide an equitable remedy
B. Reward the claimant
C. Punish the defendant
D. Restore the claimant back to their position before the act took place
Ans: D

44. Which of the following has predictability as its outcome?
A. Justice
B. Rule of law
C. Self-determination
D. International Treaties
Ans: B

45. Which of the following is True of common law?

46. Which of the following is a type of private law?

47. When does the law promote human rights?

A. When the high court applies an international treaty
B. When slavery is available to all
C. When the Governor signs a covenant
D. When the sittings of parliament are shown on television
Ans: A

48. Which of the following can best provide for the protection of human rights?