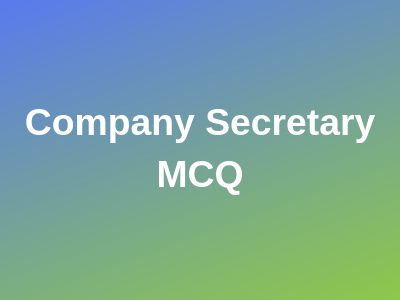 4. The Central Government may exempt any class of companies from complying with the provisions of Schedule VI of the Companies Act, 1956, if it is necessary to grant such exemption in the
a. National interest
b. Public interest
c. Social interest
d. Company’ interest
Ans: b

5. Global Ltd. has the paid-up equity capital structure – Central Government:
38%; State Government: 10%; Subsidiary of a Government Company:
17.50%; and retail shareholders remaining shares. Which of the following classes of companies would it belong to
a. Government company
b. Non-government company
c. Deemed public company
d. Deemed private company
Ans: a

8. Which one of the following sections of the Act specifies that the provision of the Companies Act, 1956 override the provisions in the memorandum of association
a. Section 2
b. Section 4
c. Section 9
d. Section 13
Ans: c

10. Where title in shares of a company is in dispute, the matter has to be resolved by
a. Court
b. Arbitrator
c. Company Law Board
d. Central Government
Ans: a

14. Non-executive directors of a public company may get remuneration on a quarterly basis if such basis of payment is approved by/under –
a. Articles of association of the company
b. General meeting of the company
c. Central Government
d. Schedule XIII of the Companies Act, 1956
Ans: c

15. As per Companies Act, 1956, the maximum number of directors a private limited company which is subsidiary of a public company, can have without the approval of the Central Government is –
a. 10
b. 11
c. 12
d. 13
Ans: c

16. A director appointed by the Board to hold the office until the conclusion of the next annual general meeting is known as –
a. Additional director
b. Alternate director
c. Nominee director
d. Director retiring by rotation
Ans: a

17. The minimum number of directors of the audit committee in the case of a listed company with 12 directors shall be –
a. 2 Directors
b. 3 Directors
c. 4 Directors
d. 5 Directors
Ans: b

19. A member of the ICSI in practice shall be deemed to be guilty of professional misconduct if he issues compliance certificates/ signs annual return in aggregate in a calendar year for more than
a. 20 Companies
b. 50 Companies
c. 80 Companies
d. 100 Companies
Ans: c

22. The appointment of a statutory auditor under section 224A is with reference to 25% of
a. Paid-up capital
b. Issued capital
c. Subscribed capital
dOnly equity capital
Ans: c

29. In a listed company with 11 directors, what is the quorum for the Board meeting
a. 2 Directors
b. 3 Directors
c. 4 Directors
d. 5 Directors
Ans: c

36. On striking off the name of a company considered defunct, the Registrar of Companies is required to
a. Publish notice thereof in official gazette
b. Inform the State Government
c. Inform the Central Government
d. Inform the Ministry of Corporate Affairs
Ans: a

39. The New York Stock Exchange requires that in case of companies listed with it, the required minimum number of independent directors on the Board shall be –
a. One
b. Two
c. Three
Ans: b