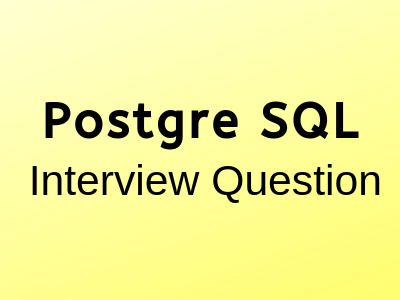 1. Define what is PostgreSQL?
This is regarded as one of the most successful open source databases in the world. This is also used to create advanced applications. This relies on the Object-relational database management system. Familiarity with UNIX and Linux can be an added advantage while using PostgreSQL.

2. State some of the advanced features of PostgreSQL?
These are the following features which are present in PostgreSQL they are

3. Explain about Write Ahead logging?
This feature increases the reliability of the database by logging changes before any changes or updations to the database. This provides a log of a database in cases of a database crash. This helps to start the work from the point it was discontinued.

9. Explain about the command enable-debug?
This command is used for enabling compilation of all libraries and applications. This process generally slows down the system and it also increases the binary file size. Debugging symbols are present which can assist developers in noticing bugs and problems associated with their script.

10. Explain about functions in PostgreSQL?
Functions are important because they help the code to be executed on the server. Some of the languages which can program functions for efficient use are PL/pgSQL which is the native language of PostgreSQL. Scripting languages are supported by many languages such as PHP, Perl, Python, etc. PL/R a statistical language can also be used.

11. Explain about indices of PostgreSQL?
There are built-in functions such as B-tree, hash table, and GIST indices can be used or users can define their own indices. PostgreSQL can scan the index backward. Expression index could be created with the result of an expression. Partial index created with the addition of WHERE clause.

12. Explain about Triggers?
By SQL query you can trigger an event. Triggers can be activated with the help of INSERT and UPDATE queries. These can be attached to tables. Triggers more than one can be triggered alphabetically. These triggers have the capability to invoke functions from other languages.

Users can create their own indexes and make them indexed.

Most of these tools are front end administration tools and web-based interfaces. Out of this phppgadmin is the most popular one.

18. Explain about tokens?
Tokens are also known to contain several special character symbols. It can be considered as keyword, constant, identifier and quoted identifier. Keywords include predefined SQL meanings and SQL commands. Variable names such as tables, columns, etc are represented by identifiers.

21. Explain about concurrency with the help of MVCC?
Multi-version concurrency control is used to manage concurrency. This feature is very useful because changes made in the database will not be visible to other users until the transaction is completed. This removes the need for reading locks. ACID principles are given a further boost by this feature and can be implemented in general.

22. How to create a database?
/usr/local/bin/create my database

23. How to list the number of databases?
so -l pgsql
psql -l

24. How to take the backup of the database?
/usr/local/bin/pg_dump my database > my database.pgdump