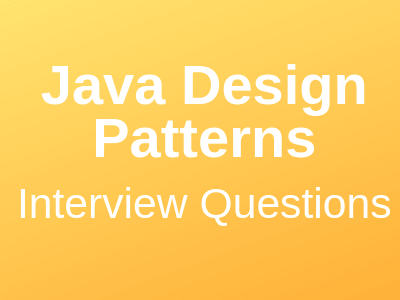 1. Define what is Java Design Pattern?
A design pattern is a language-independent strategies for solving the common object-oriented design problem. It describes how to structure classes to meet a given requirement.

Factory pattern: The factory pattern is used to create an object without exposing the creation logic to the client and refer to a newly created object using a common interface.

5. Explain in how many ways can you create singleton pattern?
To create single objects there are two famous ways

8. How can you create a Singleton class in Java?
It is two step process,

15. Define when to use a Factory Pattern?
Factory pattern can be used,

16. Explain in singleton pattern whether it is better to make the whole getinstance() method synchronized or just critical section is enough? Which one is preferable?
Synchronization of whole get Instance() method is costly and is only needed during the initialization on singleton instance, to stop creating another instance of Singleton. Therefore it is better to only synchronize critical section and not the whole method.

19. What is the difference between “throw” and “throws”?
Keyword “Throw” is used to explicitly throw as an exception, while “Throws” is utilized to handle checked exceptions for re-intimating the compiler that exceptions are being handled. The throws need to be used in the method’s definition and also while invoking the method that raises checked exceptions.

21. Define what is the limitation of using a singleton pattern?
The singleton pattern ensures that a class has only one instance and to provide a global point of access to it. But at the same time, this becomes its limitation as most classes in an application you will need to create multiple instances.

22. Define what is the difference between VO and JDO?
The difference between JDO and VO is that the JDO is a persistent technology that competes against entity beans in enterprise application development. It enables you to create POJO (plain old java objects) and persist them to the database.

While VO stands for value objects represents an abstract design pattern used in conjunction with entity beans, JDBC and possibly even JDO to overcome commonly found isolation and transactional problems in enterprise apps.

25. When to use the Template method design Pattern in Java?
Template pattern is another popular core Java design pattern interview question. I have seen it appear many times in real life project itself. Template pattern outlines an algorithm in the form of a template method and lets subclass implement individual steps. A key point to mention, while answering this question is that template method should be final, so that subclass cannot override and change steps of an algorithm, but same time individual step should be abstract, so that child classes can implement them.