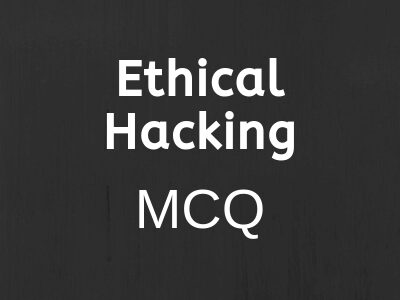 1. Scanning is performed in which phase of a pen test?
A. Pre-attack
B. Attack
C. Post-attack
D. Reconnaissance
Ans: A

3. Your target system is behind a firewall. Using hping2, you craft SYN packets to send with a hop count capable of reaching the host. You then send these packets out with port numbers from 1 to 1024. What action are you performing?
A. Firewalling
B. Firewalking
C. Passive footprinting
D. XMAS scan
Ans: B

4. What is the preferred communications method used with systems on a bot-net?
A. IRC
B. E-mail
C. ICMP
D. TFTP
Ans: A

8. Which of the following is a passive wireless discovery tool?
A. NetStumbler
B. Aircrack
C. Kismet
D. Not sniff
Ans: C

11. What is another term for turning off the SSID broadcast?
A. SSID stealth
B. SSID unicast
C. SSID cloaking
D. SSID Sec
Ans: C

12. What is the maximum length of an SSID?
A. Eight characters
B. Sixteen characters
C. Thirty-two characters
D. Sixty-four characters
Ans: C

13. Which wireless mode connects machines directly to one another, without the use of an access point?
A. Point to point
B. Infrastructure
C. Ad hoc
D. BSS
E. ESS
Ans: C

15. You are assigned to begin testing on a particular subnet. On examination of the segment, you notice the network is fully switched. Which of the following would allow you to begin sniffing traffic to or from devices on the subnet?
Hint: The key to this question lies with the ‘fully switched’ designator.
A. Use Nmap to begin a port scan.
B. Use snort to view all packets.
C. Use either flood to create a MAC flood.
D. None of the above.