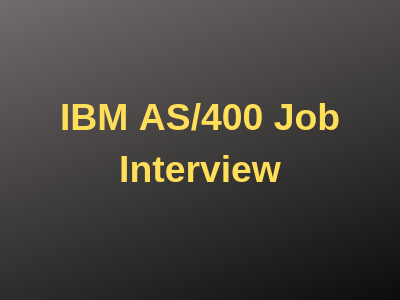 IBM AS/400 Interview Questions and Answers:-

4. What is a library list?
A list that indicates libraries used for the process and the order in which it has to be searched System identifies it in *LIBL.

8. What is the purpose of the Level Check parameter in a Physical file?
Specifies whether the level identifiers of the record formats in the physical file are checked when the file is opened by the program.

9. Define a Job Queue?
Job queues are queues of batch jobs waiting to be processed.

10. Define an Output Queue?
Output queues are queues of jobs waiting to be printed.

11. What is the function of the CPYSPLF command?
and copies the spooled file to the database file.

12. What is the function of the CPYF command?
and copy the data from the one file to another.

13. What is the function of the CRTDUPOBJ command?
and create the replica from the original object.

14. Define Subsystem?
a subsystem is nothing but it provides a specialized environment to complete the execution of jobs.

17. Describe Query/400?
andQuery/400 is a licensed program that uses a query to analyze and select the information contained in the database files and create a query report.
A query report can be:

18. What is the CLP command to access a Query/400?
andWRKQRY

19. How do you pass parameters in CL?
andUsing PARM keyword.

20. What are the valid user defined data area types?
andCHAR, NUMERIC and LOGICAL

21. What is a Multi-format logical file?
and logical which uses fields from two or more physical files.

22. What is the Select and Omit criteria in a logical file?
andThis is used to specify rules for the Selection/Omission of records from a Physical File.

24. When would the ALL keyword be used?
andUse with Select or Omit, to select/omit records.

25. What are the different types of keywords in display files?
and file level, Record format level, Field level

27. What are the different types of messages in CL?
the and Immediate message, Break message, Program message, User message

29. What is the maximum length of a variable name in CL?
andMaximum 11 characters (including ‘&’)

30. What is the use of Header Specification in RPG/400?
and identifies by H in column 6, provides information about generating and running programs.

31. When will DUMP and DEBUG opcodes be ignored?
and blank is specified in position 15 of H specs.

33. What are Control level indicators?
andL1 to L9 used to identify certain fields on control fields and then used to condition which operations are to be processed at detail or total calculation or output time.

34. What is the use of E specification in RPG?
andExtension Specs describes all record address files, arrays, and tables.

35. What is the use of L specs in RPG?
an and Line counter specification can be used to describe a printer file to indicate the length of the form and number of lines per page.

36. In which specification the report layout can be defined?
and O Specification.

38. How many printer files can be defined in F specs?
and8

39. A program variable coded in an Embedded SQL statement is referred to as?
and Host Variable

40. Which of the CL command can be used to determine which logical files are dependent on a specific file?
andDSPDBR

41. What does DFU program you to do on a record?
and Insert, Update Delete & File Enquiry.

42. When are the Unique Constraints executed?
andDuring Insert.

43. When are the Referential Constraints executed?
and Insert, Update & Delete.

44. How many triggers can be associated with a file?
and6(Maximum)

45. Why is the Declare cursor statement is used for?
and defines & name the cursor & specify rows to be fetched.

46. What do we can do with the Embedded SQL statements?
andWe can Insert/Update/Delete records, fetch records, fetch values from records into variables.

47. Which CL command is used to trap error messages during program execution?
and MONMSG

48. Which CL command can be used at program execution to redirect the file named in an RPG program?
andOVRDBF

49. What is *ISO date format?
andYYYY-MM-DD for other formats refer to IBM manual or ERIS document.

50. What are the important factors in Error message subfile?
andWe must define error message record format (SFLMSG). And a Program Queue. (PGMQ) and Record format is associated with a line number.

51. How to define a Hidden filed in DSPF?
andDefine a filed in a DSPF of use HIDDEN.(H)

52. How To get the cursor position?
andWith the help of RTNCSRLOC keyword, here we need to define a field to get row and column. Length of a variable should be 5,0 fixed We can specify *FILED for filed *REC for Record on which a key is pressed.

54.What keyword is used when the screen is re-display?
andRSTDSP is a parameter to be specified at compile time for display file.

56.How to validate input values in the Display file?
andWith the help of Validity check keywords VALUE, RANGE, COMP

57.How can see logical file based on which physical file and vice versa
andDSPDBR

58.How can u check no of records in a file
and DSPFD

59.How do u compile RPGLE program
andEither thru 15 or crtrpgmod

60.Is module executable
and No You need to create an RPG prog to run the module.

63. What is the function of RLU?
andTo design & prototype a report.

64. List some of the commonly used commands for debugging
andSTRDBG(for batch jobs), STRISDB.

65. Define the RCVF command?
an andRCVF command used to receive the records either from the database file or device file.

66. Define the purpose of the %SST function?
and To extract the information from the specified string.

67. Define the purpose of the *CAT function?
and concatenate the two strings into one string.

68. Define the purpose of the *BCAT function?
and concatenate the two strings by placing a single blank in a resultant.

69. Describe the difference between the DOWxx and DOUxx operations?
andDOWxx: If the condition becomes true, then only the group of instructions allowed executing.
DOUxx: Irrespective of condition, it will execute at least one time.

71. What is default data type (if you define decimals ‘0’) in Physical file?
and packed decimal

72. What is default data type for the fields(subfields) defined in data structures in RPG?
and zoned decimal

77. Define a Job Queue?
Job queues are queues of batch jobs waiting to be processed.

78. Define an Output Queue?
Output queues are queues of jobs waiting to be printed.

79. What is the acronym of RPG?
Report Program Generator

82. How do you use exceptional write in C specs?
Using EXCEPT opcode.

83. What does the opcode FREE do?
The FREE operation removes a program from the list of activated programs, frees static storage and ensures program initialization (first cycle processing) the next time program is called. It does not close the file or unlocks data area.

84. What does opcode POST do?
Puts information in INFDS.

85. A Query can be displayed without saving it?
andTrue

86. Which are the Query selection criteria, which can be given in a Query?
andLIST

87. To add a file to the ‘File Selection’ option of a Query, the function key to be pressed is?
andF9

88. A query can be run in which mode?
andBatch & Interactive

89. What are the values SQLCOD when there is an error in fetching the records specified in the select statement?
and-ve value

90. A file cannot have more than 1 unique key?
and also

91.DLCOBJ command is mandatory for removing the lock on any object?
and also

92. What is the Journal?
and Journal is an object used primarily to record changes to data in a PF.

93. Which are the DB2 tools to protect the Integrity of the database?
journaling & Commitment Control, Referential Integrity Embedded SQL & Object/Record Locks.

94. How many types of display are available on As/400 for user interaction?
A. The 4 Types they are Entry, Menu, Information & List Display.

96. What are the basic features of SEU?
Prompt depending upon type shows right-hand side date & left-hand side the line number.

97. What are the different methods to access SEU?
Use the Start Source Entry Utility command (STRSEU) Option 8 from STRPGMMNU Through Program Development Manager (PDM)

99. In which Specs Arrays, Tables & Constants are defined?
A.In I Specs.

100. What is a Spool File?
A. Printed output items placed in an output queue are known as spooled files.