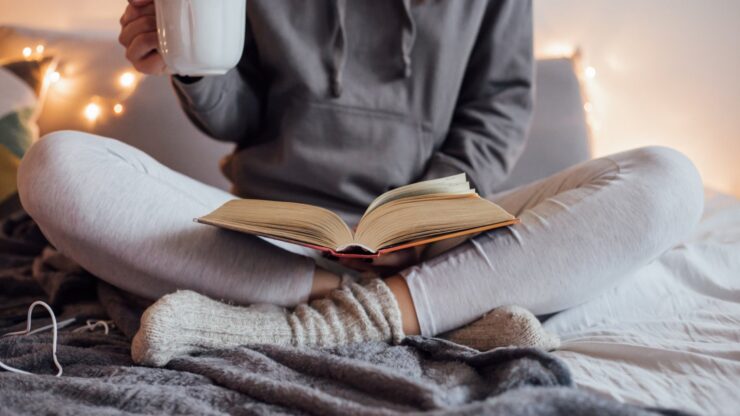 There is an eternal question a lot of people have attitudes about – Should you read the book first or watch the movie? This topic is quite controversial if you ask us because people have strong opinions about it, and usually, there is a list of reasons they use to support it.

The truth is that some people prefer reading the book first, while others consider it to be a waste of time since they enjoy watching movies. If you aren’t sure about your attitude towards this matter, here are some reasons why you should go with the book first.

1. Get the whole story

We are not saying that you won’t get the full picture when watching the movie, but the truth is that oftentimes, subplots are omitted. This is understandable, especially when it comes to complex novels that include many characters where each of them has a story to tell. After all, movies are usually an hour and a half or two hours long, so it is almost impossible to include every aspect of the story.

This is why filmmakers choose to omit some parts and make the story simpler so that it would be easier for the audience to follow and understand. Still, this means that you would probably miss an amazing plot if you were to go with the movie first. Generally speaking, a lot of people don’t see the point in reading the book since they already know the ending.

2. Create your own characters

Once you watch a movie, it is quite difficult to picture characters and settings in a different way. Surely, you have experienced this. You want to read the story, but you cannot imagine anyone else besides the actors from the film. This isn’t necessarily a bad thing, but the whole beauty of enjoying a novel is that you get the chance to imagine everything on your own. Do you know how they say that the whole point of art is to interpret it in your own way? Well, this may not be the option if you decide to go with a movie first.

We are not even going to discuss the fact that filmmakers don’t only change the original plot, but also sometimes, they even choose not to mention certain characters. This can be the only downside of reading the book first since you will have certain expectations that probably won’t be met.

If you have seen a trailer for a motion picture that is about the premier in few months, why not read the book first? There really isn’t much debate on what you should do, because, well, you only have one option. If you are looking for the next work of fiction to enjoy, why not start with “Journey to Hell,” written by John Bunyan. You get to learn about one man’s journey to hell and also understand what you can do to avoid this happening to you. Do you want to know what the best part is? The film based on this book also titled Journey to Hell is expected to premiere this year, so you have enough time to read it and then enjoy Tim Chey’s portrayal of the plot and characters.

Okay, let’s discuss this scenario. You have just seen a trailer for a new film that is about to hit the theaters. You know that it is based on a novel, but you don’t have enough time to read since you want to go see the film during the opening weekend. This is okay, but there is one thing that you have to consider. What happens if you leave the theater completely disappointed with the story you just saw? Will you still consider going back to the book? No, probably not. This is the biggest downside of watching the movie first. If you consider those two hours to be a waste of time, you probably won’t be willing to spend new two weeks reading the novel. Surely, there is an exception to this. Maybe it is an installment of your favorite franchise, or it is written by your favorite author.

We have already mentioned that some books tend to tell numerous stories simultaneously. This isn’t an issue when there are hundreds of pages that explain everything, but it does become a problem when those plots are turned into a motion picture.

One of the most common complaints that people have is that movies based on books aren’t very well written. It is super easy to get lost in all those subplots, and you may end up disliking the film because it didn’t answer all of your questions.

Well, this is something that cannot occur when reading a novel. Not only will you get all the details that make both the story and characters richer, but there is absolutely no way that some things will be left unsaid. Sometimes, there may be new questions at the end, but these are used to announce the next installment.

6. Get another point of view

We have already mentioned that the beauty of art and literature is that you can never interpret them in a wrong way. You may disagree with someone’s conclusion, but you can never say they are absolutely wrong. Well, if your favorite novel is about to be transformed into a film, you shouldn’t worry whether the plot will be destroyed. Instead, think of it as an opportunity to understand how other people understand the story.

Obviously, you can only do this if you know all the details and information that can be obtained from the original narrative. At the end of the day, you may not like their analysis, but you will get a chance to see it from another angle.

Okay, we understand how this sounds, but hear us out. When you watch a movie first, it doesn’t necessarily mean that you won’t enjoy the narrative of the book. Yes, you will be familiar with some main plots, but still, there will be many details that may take your breath away.

Nevertheless, when you read a book first, there will still be that element of surprise of how they adapted it for the big screen. You may not necessarily agree with it, but that doesn’t mean that you won’t enjoy it.