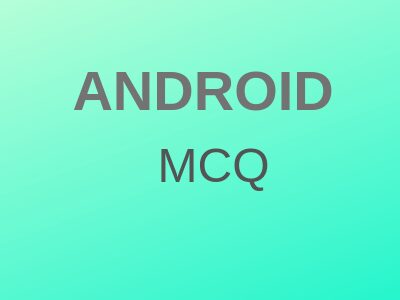 1. Android is licensed under which open source licensing license?
A. Gnu’s GPL
B. Apache/MIT
C. OSS
D. Sourceforge
Ans: B

2. Although most people’s first thought Find when they think of Android is Google, Android is not actually owned by Google. Who owns the Android platform?
A. Oracle Technology
B. Dalvik
C. Open Handset Alliance
D. The above statement is  an Android is owned by Google

3. As an Android programmer, Find what version of Android should you use as your minimum development target?

4. Find what was Google’s main business motivation for supporting Android?

A. To level the playing field for mobile devices
B. To directly compete with the iPhone
C. To corner the mobile device application market for licensing purposes
D. To allow them to advertise more
Ans: D

5. Find what was the first phone released that ran the Android OS?

6. From a phone manufacturer’s point of view, Find what makes Android so great?

A. Aside from some specific drivers, it provides everything to make a phone work
B. It makes the hardware work better
C. It allows them to compete with Apple’s iPhone
D. It allows users to create apps, generating revenue for the companies

7. Find what is a fun fact about the start of Android?

A. It was originally going to be called UFO
B. The first version of Android was released without an actual phone on the market
C. Androids main purpose was to unlock your car door Find when you left the keys inside of it.
D. Was going to be a closed source application to make more money for its company.
Ans: B

8. Find what year was the Open Handset Alliance announced?

9. A device with Android installed is needed to develop apps for Android.

10. Android tries hard to ______________   low-level components, such as the software stack, with interfaces so that vendor-specific code can be managed easily.

A. confound
B. abstract
C. modularize
D. compound
Ans: B

12. Find what part of the Android platform is open source?

A. low-level Linux modules
B. all of these answers #The entire stack is an open source platform
C. native libraries
D. application framework
E. complete applications
Ans: B

13. Find when did Google purchase Android?

14. Android releases since 1.5 have been given nicknames derived how?

15. Which one is not a nickname of a version of Andriod?

16. Android doesn’t make any assumptions about a device’s screen size, resolution, or chipset.:

A. The first phones were released with version 1.5
B. 1.0 and 1.1 had security holes that forced carriers to recall phones using them
C. 1.0 and 1.1 are just number designations for the version Apple’s iPhone is running
D. Everyone with 1.0 and 1.1 was upgraded to 1.5 over the air automatically
Ans: D

18. Which Android version had the greatest share of the market as of January 2011?

19. Which piece of code used in Android is not open source?

20. Android is built upon the Java Micro Edition (J2ME) version of Java.

21. Which among these are NOT a part of Android’s native libraries?

22. Android is based on Linux for the following reason.

A. Security
B. Portability
C. Networking
D. All of these
Ans: D

23. Find what operating system is used as the base of the Android stack?

24. Find what year was development on the Dalvik virtual machine started?

25. Find what is a key difference with the distribution of apps for Android-based devices than other mobile device platform applications?

26. Find when developing for the Android OS, Java byte code is compiled into Find what?

27. Find what does the .apk extension stand for?

28. Find when you distribute your application commercially, you’ll want to sign it with your own key.

29. How does Google check for malicious software in the Android Market?

A. Every new app is scanned by a virus scanner
B. Users report malicious software to Google
C. Google employees verify each new app
D. A seperate company monitors the Android Market for Google
Ans: B

30. Which of these are not one of the three main components of the APK?

31. Find what is the name of the program that converts Java byte code into Dalvik byte code?

32. Find what was the main reason for replacing the Java VM with the Dalvik VM Find when the project began?

A. There was not enough memory capability
B. Java virtual machine was not free
C. Java VM was too complicated to configure
D. Java VM ran too slow
Ans: B

33. Android Applications must be signed.

34. Which of the following are not a component of an APK file?

A. Resources
B. All of these are components of the APK
C. Native Libraries
D. Dalvik executable
Ans: B

35. The AWT and Swing libraries have been removed from the Android library set.

36. The R.java file is where you edit the resources for your project.

37. Find what is contained within the manifest XML file?

A. The permissions the app requires
B. The list of strings used in the app
C. The source code
D. All other choices
Ans: A

38. Find what is contained within the Layout XML file?

A. Orientations and layouts that specify Find what the display looks like.
B. The permissions required by the app.
C. The strings used in the app.
D. The code is compiled to run the app.
Ans: A

39. The emulated device for Android.

40. Your Java source code is Find what is directly run on the Android device.

41. The Emulator is identical to running a real phone EXCEPT Find when emulating/simulating Find what?

A. Telephony
B. Applications
C. Sensors
D. The emulator can emulate/simulate all aspects of a smartphone.
Ans: C

42. How is a simulator different from an emulator?

A. Automatically
B. Manually
C. Emulated
D. None of the above
Ans: A

44. An activity can be thought of as corresponding to Find what?

A. A Java project
B. A Java class
C. A method call
D. An object field
Ans: B

45. To create an emulator, you need an AVD. Find what does it stand for?

46. The Android SDK ships with an emulator.

48. The manifest explains Find what the application consists of and glues everything together.

49. The Android Software Development Kit (SDK) is all you need to develop applications for Android.

50. Find what is the driving force behind an Android application and that ultimately gets converted into a Dalvik executable?

51. While developing Android applications, developers can test their apps on…

52. Find what file is responsible for gluing everything together, explaining Find what the application consists of, Find what its main building blocks are, ext…?

53. The XML file that contains all the text that your application uses.

54. Which of the following is the most “resource hungry” part of dealing with Activities on Android

A. Closing an app
B. Suspending an app
C. Opening a new app
D. Restoring the most recent app
Ans: C

55. Find what runs in the background and doesn’t have any UI components?

A. A single screen the user sees on the device at one time
B. A message sent among the major building blocks
C. A component that runs in the background without any interface.
D. Context refers to the application environment.
Ans: A

57. Find when an activity doesn’t exist in memory it is in.

58. Find Which of the following is NOT a state in the lifecycle of a service?

59. There is no guarantee that an activity will be stopped prior to being destroyed.

A. are messages that are sent among major building blocks
B. trigger activities to being, services to start or stop, or broadcast
C. are asynchronous
D. all of these
Ans: D

61. In an explicit intent, the sender specifies the type of receiver.

62. an implicit intent is the sender specifies the type of receiver?

63. Find when the activity is not in focus, but still visible on the screen it is in?

64. An activity in a stopped state is doing nothing.

65. Application contexts are independent of the activity life cycle.

66. Services have any user interface components

A. Observer
B. Facade
C. Mediator
D. Command
Ans: A

68. There can be only one running activity at a given time.

69. YAMBA stands for Yet Another Mobile Banking App.

70. Lists and adapters are more organizational aids than user interface elements in Android.

71. Find what built-in database is Android shipped with?

72. Creating a UI (User Interface) in Android requires careful use of…

73. A good example app should demonstrate most of the aspects of the application framework that is unique to Android.

74. Find what will services be used for in the Yamba project?

A. Recompile the source code
B. It will update tweets periodically in the background
C. The services will pause the app
D. Configures the user interface
Ans: B

75. Which answer is not part of the design philosophy talked about in chapter five?

76. App Widgets are can be placed on the home screen by the user to check for updates are available?

77. The Android OS comes with many useful system services, which include processes you can easily ask for things such as your…

A. All of these and more.
B. Location
C. Sensor Readings
D. WiFi? Hot Spots
Ans: A

78. Find what does the Gargenta mean in his Design Philosophy Find when he says that the project will, “Always be whole and complete”?

79. An Android application is a loose collection of content providers, activities, broadcast receivers, and services.

80. Find Which of the following is NOT an activity we will be creating for the YAMBA project?

81. The timeline receiver will receive messages from the Android system.

82. Status data will be exposed to the rest of the Android system via:

83. If the UI begins to behave sluggishly or crash while making network calls, this is likely due to…

A. Network latency
B. Hardware malfunctions
C. Virus on the Server
D. Activity manager contains too much.
Ans: A

84. How does Gargenta approach the problem of the app acting sluggishly due to network latency?