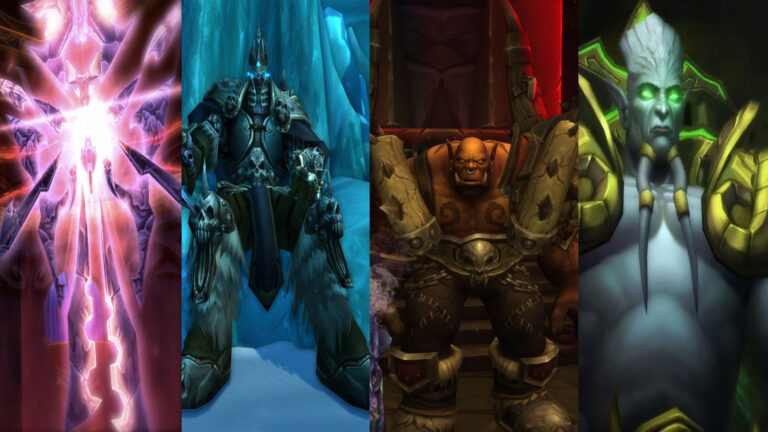 Not a lot of games can boast about being on the market for so long, that gamers grew up playing them. And still, the quality of the story and gameplay is on the same high level, as it was when it all began.

General gamer culture dictates that you know some of the information about this game, so we will mention just a few. World of Warcraft is therefore one of the longest-lived and most played MMO games currently available. In more than a decade of its existence, its popularity has gathered over 13 million active subscribers and, of course, a mountain of money for the developers of this game.

The great Blizzard has refreshed the game since its release through a number of expansions, each of which added one new continent and up to 10 new levels to advance. The Burning Crusade is the first such expansion, and it has brought a parallel world to Outland and allowed the player to reach level 70 in the fight against the demonic hordes that inhabit this wild, new world. Fast forward to 2022, we now have a new expansion, gamers are crazy about, Shadowlands.

Over the span of its rich history, this game brought all kinds of quests and challenges many had to sweat for day to finish. But, it wasn’t only the gamers that had to sweat… With improving skills and getting better and better at this game, developers also had to find a way to make things as exciting and challenging as possible. As a result, each expansion was marked by at least one super difficult boss to defeat.

These never-ending improvements were the reason the game went into history books, after all. So, for all of you out there who have been loyal to WoW for years, let’s take a trip down memory lane and list all the hardest raid bosses we had to defeat to get this far.

Those who played in 2008 remember him as the hardest boss players have encountered up to that point. Whether you were a DPS player or a healer, you must have been exposed to a lot of stress while trying to defeat him. No wonder. He held the position of being the toughest challenge in his expansion (The Burning Crusade) for quite some time. But, as we said in the introduction, players got more and more skills in this game, and those who still play and look back to the expansion M’uru was in, now consider defeating him a piece of cake.

What was once considered super hard for the guilds to achieve, is now an easy task, given the complexity of today’s expansion bosses. That’s not the reason why we shouldn’t pay respects to M’uru on our list, since he played a crucial role in gamers having skills like they do today.

As for the best raids gamers experienced while playing, Blackrock Foundry holds the place as being one of the most memorable. Why? The difficulty factor was constant from the beginning until the end. Guild had to really sweat in order to get to the finish line. For most, it took about a hundred attempts to finish, and the icing on the difficulty cake was the last boss –  the Blackhand. Just to illustrate how difficult it was to finally kill him – the world’s top guild had to try as much as 325 times.

3. Bosses of the Shadowlands

Although still the newest expansion, gamers have assessed that Sepulcher of the First Ones is the toughest, as being the last raid of the expansion. The order by which you are supposed to defeat the bosses have been changing, but the final one, also the most difficult one is the unchanged – Zovaal himself. However, there’s a way to avoid sweat and tears and defeat him a little easier, and it involves getting a boost on  https://buy-boost.com/wow/sepulcher-of-the-first-ones-sotfo-boost .

There’s one interesting fact connected to this boss worth mentioning – he managed to survive for two weeks, and two server resets! Therefore, those who played in 2013 remember him well.

Remembering the Battle for Azeroth, here’s one boss that surely made it to your permanent memory. Although the fight itself was not that difficult, what made defeating him a challenge was the mechanics unique only to him.

How much of a headache was he to the guilds? Well, the fact that one had to change the race of every player to defeat says enough.

Released in 2019, this boss still is the one that required the most mechanics than some modern fights. If not managed well, the mechanics could easily wipe the raid.

As opposed to the two bosses we previously mentioned, the mechanics of this one was not as difficult as was the fact they were completely overturned. What made many players sweat around this was the fact that they had to be ultra-geared in order to defeat him. And he wasn’t even the final one.

Here’s one that required the guild to have a top-notch strategy, constantly communicating about positions, and being constantly aware of each other. And still, the outcome was very hard to predict, as it felt like gambling most of the time. This boss also had a spell that when cast threw a huge amount of damage to the player for a couple of seconds, which was then transferred to another player.

Others we’ve mentioned so far were tough because of the mechanics or something else, this one though, seemed like an easy fight. Still, it took guilds 20 minutes and more to get rid of him. And he isn’t even considered hard, looking back at all the others players had to defeat.

His abilities were far too damaging to guilds, in a way that even healers struggled to keep up with the damage he inflicted to others. Some even had an impression he was created by the developers on purpose, so the raid is impossible to finish.

That’s it for our list of the meanest and hardest bosses in WoW. What will the future expansions hold, it remains to be seen.